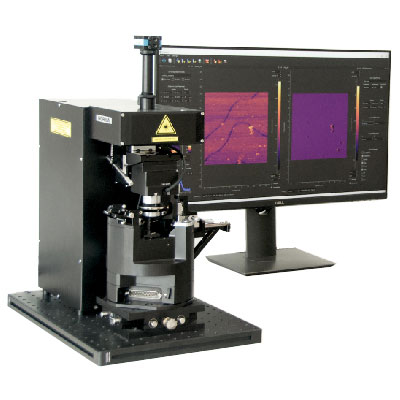 The Qnami ProteusQ is a complete quantum microscope system. It is the first scanning NV (nitrogen-vacancy) microscope for the analysis of magnetic materials at the atomic scale. By combining NV magnetometry and scanning probe microscopy techniques into a single instrument, scanning NV magnetometry provides simultaneous acquisition of the sample's topography and its surface magnetic fields with nanoscale resolution. While the tip's radius of curvature determines the lateral resolution for the topography image, it is the distance between the NV center and the sample surface which determines the lateral resolution for the magnetic image.

The ProteusQ system comes with state-of-the-art electronics and software, and has been designed to allow for future adjustments, expansion and capability upgrades. Qnami’s proprietary quantum technology allows you to see directly the most subtle properties of your samples and the effect of microscopic changes in your design or fabrication process.