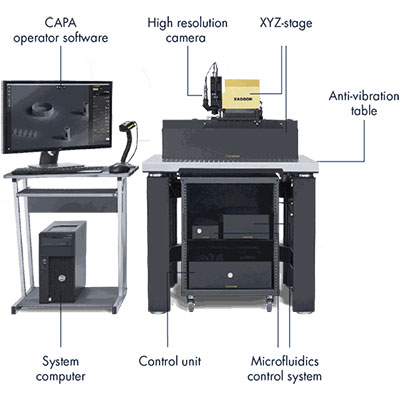 CERES prints complex and pure metal objects at the micrometer scale with sub-micrometer resolution. It is also capable of writing patterns with liquids and nanoparticles that can be made of different materials. Combining nanometer-accurate positioning, electrochemical deposition, air pressure-driven liquid dispensing, and optical force feedback, CERES is a stand-alone system with an intuitive graphical user interface that seamlessly connects all parts of the system. Pinpoint-accurate printing is made possible through two high-resolution cameras (top and bottom view) that allow for computer-assisted alignment. The cameras also support automated iontip loading as well as visualization of the printed structures.

The additive micro-manufacturing technology (µAM) used by CERES is based on electrochemical deposition. A small printing nozzle, called an iontip, is immersed in a supporting electrolyte bath. Precisely regulated air pressure pushes the metal ion containing liquid through a microchannel inside the iontip. The liquid flow can be as low as femtoliters per second. The ion-containing liquid is released onto the surface at the end of the microchannel. The dissolved metal ions are then electrodeposited into solid metal atoms. The metal atoms are grown together into small building blocks called voxels. Optical force feedback registers the completion of each voxel until all voxels are printed and the complete object is constructed. This electrochemical printing process takes place at room temperature. 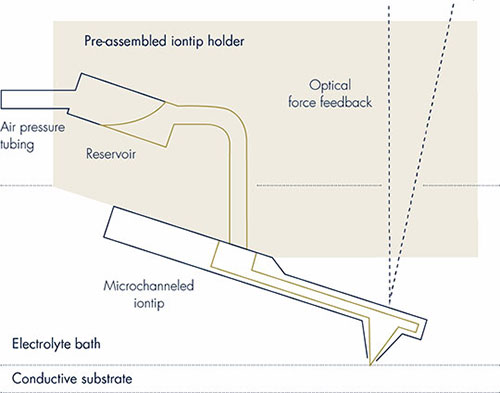